How would I set up for Sefrou-Ramal? 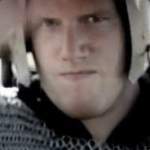